Canadians like to decorate their houses with Christmas Trees, lights and other decorations. Th

ere’s often Christmas stockings hung by the fireplace, ready for Santa! The main Christmas meal is often roast turkey with vegetables and ‘all the trimmings’ like mashed potatoes and vegetables. Canada is a very large country and people of many different cultural backgrounds live there. Because of this, there are lots of different Christmas traditions in Canada. Many of the traditions and celebrations come from French, English, Irish, Scottish, German, Norwegian, Ukrainian and native/first nation influence. People in Canada send Christmas Cards to their friends and family. Many Canadians open their gifts on Christmas Eve. Some only open their stocking on Christmas Eve. Others choose one gift to open, then save the rest until Christmas Day.

Canadians like to decorate their houses with Christmas Trees, lights and other decorations. There’s often Christmas stockings hung by the fireplace, ready for Santa! The main Christmas meal is often roast turkey with vegetables and ‘all the trimmings’ like mashed potatoes and vegetables. Traditional favorite Christmas desserts include Christmas/plum puddings and mincemeat tarts. Christmas crackers are popular with many people in Canada as well. A rich fruit Christmas Cake is also normally eaten around Christmas time However, people from different backgrounds and cultures have their own favorite foods at Christmas. From https://www.whychristmas.com/cultures/canada.shtml. Compiled by Gracia Kifwame 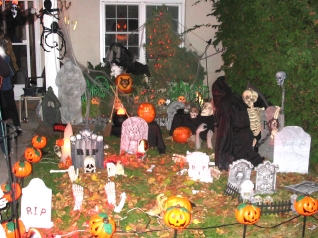 Most people in Canada are very into the holiday of Halloween. People put a lot of effort into decorating their homes, yards and much more. Some may even create life-size replica graveyards or dungeons and invite people from the neighborhood to view their decorations or have have Halloween parties. Other people may organize fancy dress parties for adults or children.

Many children just like in the United States go out to trick-or-treat. They dress up as  different characters from TV shows and movies and visit homes in their neighborhood to collect candy from anyone who’s participating.

Children also take part in a long-standing Canadian tradition of “Trick-or-Treat for UNICEF”. Pumpkin-carving contests, pumpkin art tours, a reading marathon, and symbolic Walks for Water are just a few examples of the educational and fundraising activities schools and children develop to help provide thousands of children developing countries with basic quality education.

Halloween in Canada is very similar to Halloween in the United Sates. There is hardly anything different about the way we both celebrate Halloween. -Ty’Quirra Mayo

Around Christmas time in Sweden, one of their biggest celebration’s is St. Lucia’s Day which is  celebrated on December 13th. St Lucia was a young girl who was tortured and killed for what she believed in in 304 AD A lot of people have stories about Lucia and one of the stories everybody  tells is she would secretly bring food to the victimized christian’s Rome, who lived in hiding in the catacombs under the city. She would wear candles on her head so she had both of her hands free to carry things.

They now celebrate by dressing in a white dress with a red sash round her waist and a crown of candles on her head. The small children uses electric candles but from 12 years old,real candles are used. A National Lucia is chosen and they go visit hospitals and old people homes  singing a song.

St.Lucia’s Day first became widely celebrated in Sweden in the Late 1700s. It is also celebrated in Denmark,Norway,Finland,Bosnia and Croatia. In Denmark, it is more a of a children’s day and in some parts of Italy,children are told that St Lucy brings them presents.They leave out a sandwich for her and the donkeys that help carry the gifts! -Ketsia Tukeba